DETROIT – General Motors and Ford Motor Co. said they would close all of their manufacturing sites in the United States, Canada and Mexico until at least March 30 – marking a costly and dramatic step to battle the coronavirus pandemic that the automakers had hoped to avoid.

Fiat Chrysler Automobiles also said it would begin easing production today, through the end of the month.

Ford said the shutdowns will begin after Thursday's shifts. GM said it will begin cutting production Wednesday in a cadence.

“We’re continuing to work closely with union leaders, especially the United Auto Workers, to find ways to help keep our work force healthy and safe – even as we look at solutions for continuing to provide the vehicles customers really want and need,” Kumar Galhotra, Ford’s president of North America, said in a statement. “In these unprecedented times, we’re exploring unique and creative solutions to support our work force, customers, dealers, suppliers and communities.”

As of Tuesday night, the automakers had planned to continue running their plants without a wholesale interruption. In a meeting with UAW leaders, executives agreed to a number of enhanced safety measures, including rotating partial shutdowns and extra time between shifts to allow for extra cleaning.

But on Wednesday, Ford had to close off part of its Ranger plant because a worker there tested positive. Ford’s Explorer plant in Chicago also was down Wednesday because a Lear seating plant that supplies it closed after a worker got the virus.

A six-day manufacturing stoppage across North America announced by American Honda, whose factory workers are nonunion, also helped the UAW pressure the Detroit 3 into a temporary shutdown.Toyota later announced a two-day production halt in North America next week. "We have agreed to a systematic, orderly suspension of production to aid in fighting COVID-19/coronavirus,” GM CEO Mary Barra said in the company's statement. “We have been taking extraordinary precautions around the world to keep our plant environments safe, and recent developments in North America make it clear this is the right thing to do now."

FCA said its production suspension will “start progressively today” and last “through the end of March.” Two COVID-19 cases were detected among FCA’s plant workers, one who is employed at the Sterling Heights Assembly Plant and another who works at the transmission plant In Kokomo, Ind.

“While production is paused, the company will put actions into place to facilitate the steps agreed to through the joint task-force set up between the UAW and the automakers,” FCA said in a statement. “Through this period, which we will re-evaluate at the end of this month, FCA will work to enhance its manufacturing operations to facilitate the changes agreed with the UAW including shift timings, structures and enhanced cleaning protocols.”

FCA CEO Mike Manley said “working with the UAW, and having visited many of our plants yesterday, we need to ensure employees feel safe at work and that we are taking every step possible to protect them.”

Manley said FCA will “continue to do what is right for our people through this period of uncertainty.” 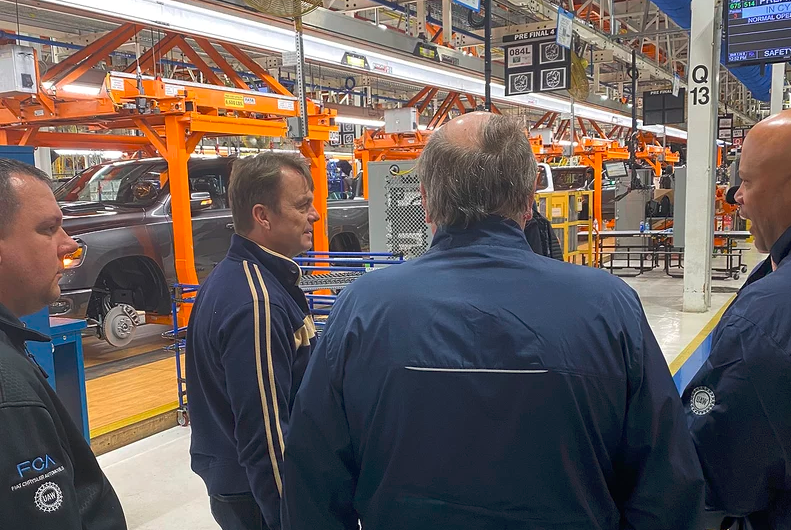 FCA CEO Mike Manley visited the company's Sterling Heights Assembly Plant in Michigan on Tuesday. The plant was later idled after a worker there tested positive for the virus.

U.S. Rep. Debbie Dingell, D-Mich., a former GM executive and longtime industry supporter, said: "In the end, this was not a difficult decision. Everyone involved knows the importance of the auto industry to the American economy and the impact of a potential shutdown.

“The first priority for everyone is to mitigate the spread of this virus," her statement said. "UAW leadership was focused on protecting the health and safety of their workers as a first priority. The effects of the virus will ripple through our economy for a long time. However, we will never be able to rebound without the hardworking men and women of the auto industry.”

Ford said it would work with the UAW on plans to restart production.

The automaker planned to restart production March 30 at its Kansas City Assembly (Transit side) and Louisville Assembly plants on one shift, down from two, workers were told. KCAP’s truck side will return on two shifts, down from three. The Kansas City schedules were outlined in a memo handed to employees while Louisville's UAW plant chairman posted a letter on Facebook.

Ford’s Kentucky Truck Plant is expected to return on two shifts, down from three, according to its UAW plant chairman, who posted a letter to Twitter. In all instances, Ford will rotate which shift is laid off on a weekly basis.

“Today’s action is the prudent thing to do. By taking a shutdown and working through next steps, we protect UAW members, their families and the community,” UAW President Rory Gamble said in a statement. “We have time to review best practices when the plants reopen, and we prevent the possible spread of this pandemic. We commend Ford for working with us and taking this bold step.”

A Ford spokeswoman said Ford’s parts distribution facilities will remain open so they can supply parts to customers.